Indiana State Police Superintendent Douglas Carter recently announced the promotion of Senior Trooper Davonne D. Barlow to the rank of Sergeant to serve as a District Squad Leader for the Lowell Post.  Sgt. Barlow earned this promotion through written testing and a competitive interview process.

Sgt. Barlow graduated from Horace Mann High School in Gary, IN, and went on to earn a bachelor’s degree in Criminal Justice from Indiana State University.  In 2011, he was selected to attend and graduated from the 70th Indiana State Police Recruit Academy located in Plainfield, IN.  After graduation, he was assigned to the Lowell Post working primarily in Lake County.

In his free time, Sgt. Barlow is an avid workout enthusiast, enjoys spending time with his children and is a movie buff.

Sgt. Barlow resides in Lake County with his wife, Kenya, and his two sons. 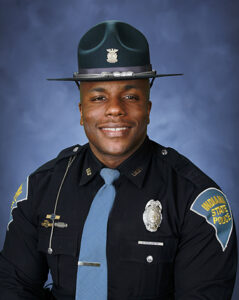