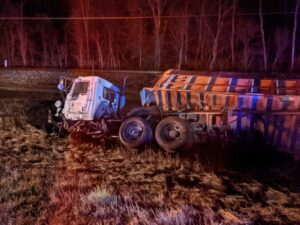 One person was deceased at the scene this morning of a horrific crash involving a semi-tractor trailer and passenger vehicle, the Chesterton Fire Department is reporting.
As of 7:30 a.m. today the victim’s name had not been released and emergency services were still at the scene. Interim Fire Chief Eric Camel said that all east- and westbound lanes of U.S. 20 were closed to traffic between Tremont Road and C.R. 200E, to expedite reconstruction of the crash as well as cleanup of the scene.
The CFD responded to the scene at 4:17 a.m. Camel was unable to comment on the circumstances of the accident except to say that the semi was apparently eastbound on U.S 20 at the time of impact. The crash left the passenger vehicle essentially split in two and a debris field of approximately a quarter of a mile in extent. Reconstruction is being performed by a Porter County Sheriff’s Police deputy.
The operator of the semi—also not identified—was transported to hospital with unknown injuries.
At some point after the initial crash, a second passenger vehicle—not involved—drove through the debris field and sustained under-carriage damage, Camel said.
Chesterton firefighters applied oil dry to the roadway to contain leaking fluids from the semi and erected a light tower, not clearing the scene until 5:54 a.m.
Camel did note that the semi was hauling aluminum sulfate, a non-toxic powder used in the purification of drinking water. Some quantity of the powder spilled in the accident and a hazmat crew with the Porter County Environmental Department was at this scene as well this morning removing it from the roadway.
Also responding: the Porter Fire Department and Northwest Health-Porter EMS.
Photo by Chesterton Fire Department
April 13th, 2021|Local News|
Page load link
Go to Top