Previous Next
On April 7, 2021, at 8:30 PM, Deputy Wade Wallace was stopped southbound on Vail Street near Michigan Boulevard waiting for the traffic control device to cycle. A Major passenger vehicle was also stopped directly in front of Deputy Wallace.
HEATH A. HAFERKAMP Once the traffic control device cycled, traffic traveled south across Michigan Boulevard and onto Poplar Street. The vehicle that Deputy Wallace was traveling behind made a right turn into the parking lot of the Go-Lo, a business located at 1133 East Michigan Boulevard. While executing said turn, the vehicle committed a traffic infraction.
Deputy Wallace initiated a traffic stop on the vehicle in the parking lot of the business. He made contact with the driver (lone occupant), a 17-year-old male. During a conversation with the driver, probable cause was established for a vehicle search.
Deputy Jon Samuelson arrived to assist while the vehicle search was completed. Under the driver’s seat, Deputy Wallace located a loaded silver and black Smith and Wesson SW40VE .40 caliber handgun with an extended 30 round magazine. In addition, he located a sliver .40 caliber magazine between the driver’s seat and center console.
The juvenile was taken into custody and transported to the Juvenile Services Center. He was arrested for Carrying a Handgun without a License, a Class A-Misdemeanor. Arrests and criminal charges are mere accusations. Every person is presumed innocent unless and until proven guilty in a court of law. 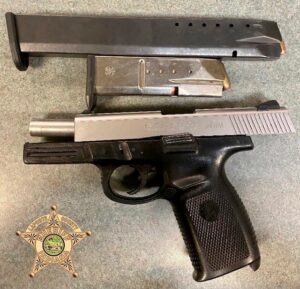