DRIVER CRASHES AND FLEES, CRASHES AGAIN, IS LOCATED AND ARRESTED FOR OWI

On April 8, 2021, at 2:30 AM, Deputy Jet Balenia was dispatched to the area of Wozniak Road and CR 450 North, rural Coolspring Township, reference a hit and run crash involving a fence. Upon arrival in the area, Deputy Balenia learned of a second crash that had just occurred on Wozniak Road near Surrey Lane. Surrey Lane is located approximately three (3) miles south of CR 450 North. Prior to leaving the area of the hit and run crash, Deputy Balenia located a silver bumper in the lawn of a residence in the 7500 west block of CR 450 North.
Upon arriving at the second crash scene, Deputy Balenia observed a silver passenger vehicle overturned and resting on its roof along the northbound shoulder of Wozniak Road. The driver of the vehicle was located nearby and identified as Lydia M. BIM-MERLE (27 YOA) of La Porte. As Deputy Balenia conversed with BIM-MERLE, he quickly recognized that she was impaired by alcohol.
Information, along with vehicular evidence at the scene, connected the vehicle to both crashes. Deputy David Grimberg responded to the first crash scene to gather necessary information. BIM-MERLE was transported to an area hospital for treatment. BIM-MERLE was medically cleared, taken into custody, and transported to the La Porte County Jail (LCJ).
BIM-MERLE was arrested for the following offenses:
 Operating While Intoxicated, Class A-Misdemeanor X’2
 Operating While Intoxicated, Class C-Misdemeanor
 Failure to Stop, Class B-Misdemeanor
BIM-MERLE has since been released from the LCJ following a cash bond that was posted on her behalf.
Assisting: Sergeant James D. Arnold, Westville Police Department, La Porte County EMS, Coolspring Volunteer Fire Department, Music Towing
Arrests and criminal charges are mere accusations. Every person is presumed innocent unless and until proven guilty in a court of law. 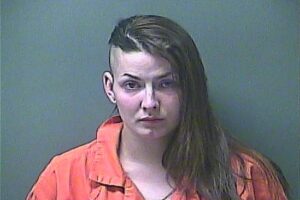