A traffic stop was initiated on the vehicle in the 3500 north block of Fail Road. As Deputy Greer was about to exit his vehicle, the violator suddenly sped off initiating a motor vehicle pursuit (MVP). As the MVP traveled south on Fail Road, the erratic fleeing vehicle ran several motorists off the roadway. The MVP traveled west on SR 2 through La Porte. While doing so, the fleeing vehicle avoided a set of tire deflation devices (TDD’s) that had been deployed by Deputy Josh Smith at an intersection. As the MVP continued on SR 2, west of La Porte, the fleeing vehicle continued to force oncoming motorists off the roadway. At the intersection of SR 2 and US 421, the vehicle avoided another set of TDD’s that had been placed on the roadway. The MVP continued west onto CR 300 South. In the 11800 west block of CR 300 South, the fleeing vehicle traveled off the roadway, into the lawn of a residence and to a tree line. Deputies were able to successfully box in the vehicle to prevent it from leaving.

The driver was extracted from the vehicle, taken into custody, and identified as Judith N. TAYLOR (39 YOA) of Michigan City. TAYLOR was transported to the La Porte County Jail (LCJ). TAYLOR was arrested for the following offenses:

TAYLOR remains housed in the LCJ and is being held on a $755 dollar cash-only bond through Circuit Court.

Arrests and criminal charges are mere accusations.  Every person is presumed innocent unless and until proven guilty in a court of law. 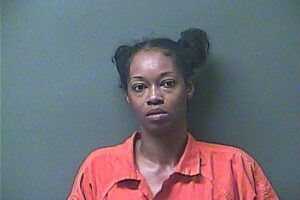