The Inspiration Wood Wellness Center in Pine Township was destroyed by fire Tuesday morning, the Town of Chesterton announced via a report from the Chesterton Fire Department.

The CFD was one of nearly a dozen departments which assisted the Pines FD at the scene, located at 642 Inspiration Road, according to a Facebook posting from the Town of Chesterton.

The fire was discovered at 9:29 a.m. by an aircraft pilot checking pipeline for Enbridge Inc., who saw “flames and smoke showing” and on circling the scene reported that the building appeared to be unoccupied, CFD Chief Eric Camel said.

The report proved to be correct, according to the Town Of Chesterton.

The Wellness Center was fully involved on firefighters’ arrival. “Half the structure was burning when we got there,” Camel said. “It was rolling good.”

The Town of Chestertons says the immediate challenge was water. Although the property has a dry well connected to a pond, the couplings brought to the scene by the CFD weren’t compatible with the dry well’s fittings, Camel said. The Coolspring Township FD soon brought the right couplings and drafting operations from the pond got under way, but even with multiple tankers responding to the scene and dumping their water, more was needed. A shuttle was accordingly organized, with tankers filling at a hydrant near the Pine Elementary School on County Line Road. Camel estimated that tankers made two to three trips each to the hydrant, keeping a pair of aerials—Burns Harbor’s and Coolspring Township’s—as well as several deck guns supplied. 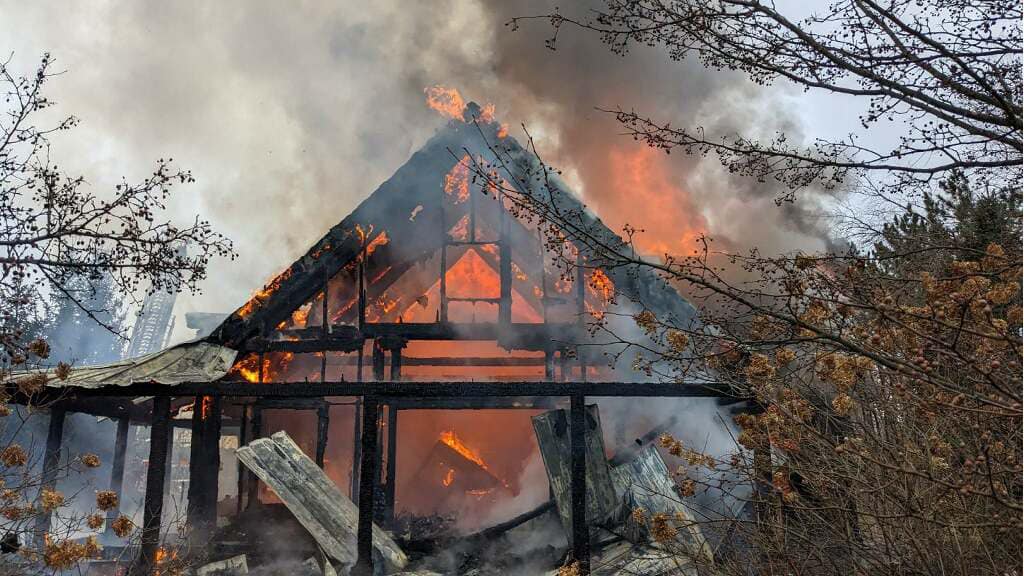 In the end, Camel calculated roughly, between 100,000 and 150,000 gallons were used to drown the blaze, and possibly more than that.

The CFD cleared after exactly three hours at the scene, at 12:40 p.m.

The cause of the fire remains undetermined, Camel said.

The Town of Chesterton reported that both the Porter County Fire Investigation Strike Team and the State Fire Marshal were on the scene Tuesday afternoon.